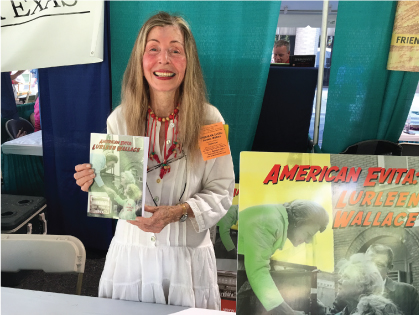 Chapter of Initiation: Zeta - Albion College Chapter of Affiliation: Xi - University of Michigan Years in Delta Gamma: 61 Profession: Author and Journalist; Retired Judge In the turbulent 1960s, as a journalist at the Houston Chronicle, Janice traveled the U.S. with a group of colleagues from America's major newspapers: Time, Newsweek, NYT, AP, UPI etc. where she covered religion. But because the Civil Rights movement began in churches, she, in actuality, covered Civil Rights too. Her first year she won a major religion journalism award and her second year, was a finalist for another. She transitioned to the Fort Lauderdale News where she wrote features and local politics, eventually becoming in 1974, the first female statehouse Bureau Chief of a major newspaper in Florida. In 1976, Janice entered law school. Her first job was as a state prosecutor: first in Bartow and then in Fort Lauderdale where she was one of the first women to head a felony trial division. She then served as a staff attorney to Houston area federal judges, an Assistant, City Attorney in Houston, and then an Assistant U.S. Attorney in Texas. Janice moved up the judicial ladder from an associate Municipal judge in Houston, to a county criminal court judge, and is now retired. Janice is the author of nine books and has appeared as a featured author or panelist at nearly all major national book festivals. Her first book, detailing her first year on the county criminal court bench, was a nonfiction finalist for the Texas Book Award. She has traveled to about 130 countries. In 2002, along with her husband Don Jansen, she won two Tellys (national award) for Best Jingle and Best Advertisement. For 13 years, she has written a travel column for the Galveston Daily News, Texas' oldest daily newspaper. Nine years ago, she founded a nonprofit to honor America's premier women writers: American Women Writers National Museum. Learn more about Janice on her author website. Spouses of U.S. Supreme Court Justices & guests (L-R): Sue Patterson, President American Lawyers Alliance, Maureen Scalia, Mary Ann Kennedy, Joann Breyer, Judge Janice Law featured speaker, Janet Bullinger, chair. What is your Favorite SIG or DG Event? The “speed” advice event about a year ago, where alums sat in chairs as area student D.G’s visited seriatim, in timed segments, about goals. And the luncheon group and Holiday tea. How have the skills and experiences you had as a collegiate and alumnae DG helped you professionally? Making contacts: Many successful women are DGs. What professional achievements are you most proud of? Winning writing awards as a journalist and author. Serving as a Texas criminal court judge. Do you have a founder that you resonated with most? Anna Boyd Ellington who brought up four daughters and held down a teaching job after her husband’s death. Do you have a favorite community service activity or organization that you work with? American Women Writers National Museum, a nonprofit I founded nine years ago to honor and showcase America’s premier women writers, historic and contemporary. Do you have a favorite place or trip? Over more than 60 years, I have traveled to about 130 countries. I’ve written a travel column for 14 years for the Galveston Daily News, Texas’ oldest daily newspaper. I’ve enjoyed all the countries and their people. Favorites include Papua New Guinea, Mongolia, West Africa (Timbuktu), Easter Island. Any advice you would like to give sisters (related to DG, professional, life, living in DC)? Personal: Try, over a lifetime, to maintain contact with DG sister initiates, and with sisters you meet along life’s journey. When life takes you to a new geographical area, you can always quickly find a new circle of friends with DG. There is no room here to praise all DGs who have helped me over the years. Professional: Persevere. Never give up a goal. If you fail or fall, stumble up and resume going forward. I was the first in my family on both sides, to earn a professional degree and serve in judicial office.

Chapter of Initiation: Beta Zeta - Denison University Years in Delta Gamma: 65 Profession: Pioneer in elementary school computer education in Washington, D.C. metropolitan area; Retired 2011 Any advice you would like to give sisters (related to DG, professional, life, living in DC)? I have lived in 5 cities since graduating from college and in each one, I found friends quickly through the DG Alumnae group in each new place. I recommend this if you move to another location! Living in Washington DC is wonderful. I grew up in Rockford, Illinois, which was a great place to grow up except there were few cultural opportunities, so I cherish living here and always take advantage of the museums, concerts, ballet, theater, and opera. It is exciting to live in the nation’s capital and to come in contact with important people. I encourage everyone to take advantage of all of the opportunities that are available to residents of our area. What is your Favorite SIG or DG Event? My favorite events with the DC DG group are the Lunch Bunch monthly lunches at different restaurants and the Founder’s Day event. In the Maryland Suburban group, I enjoy the Christmas brunch which involves making treat bags for the collegians and gift exchange.